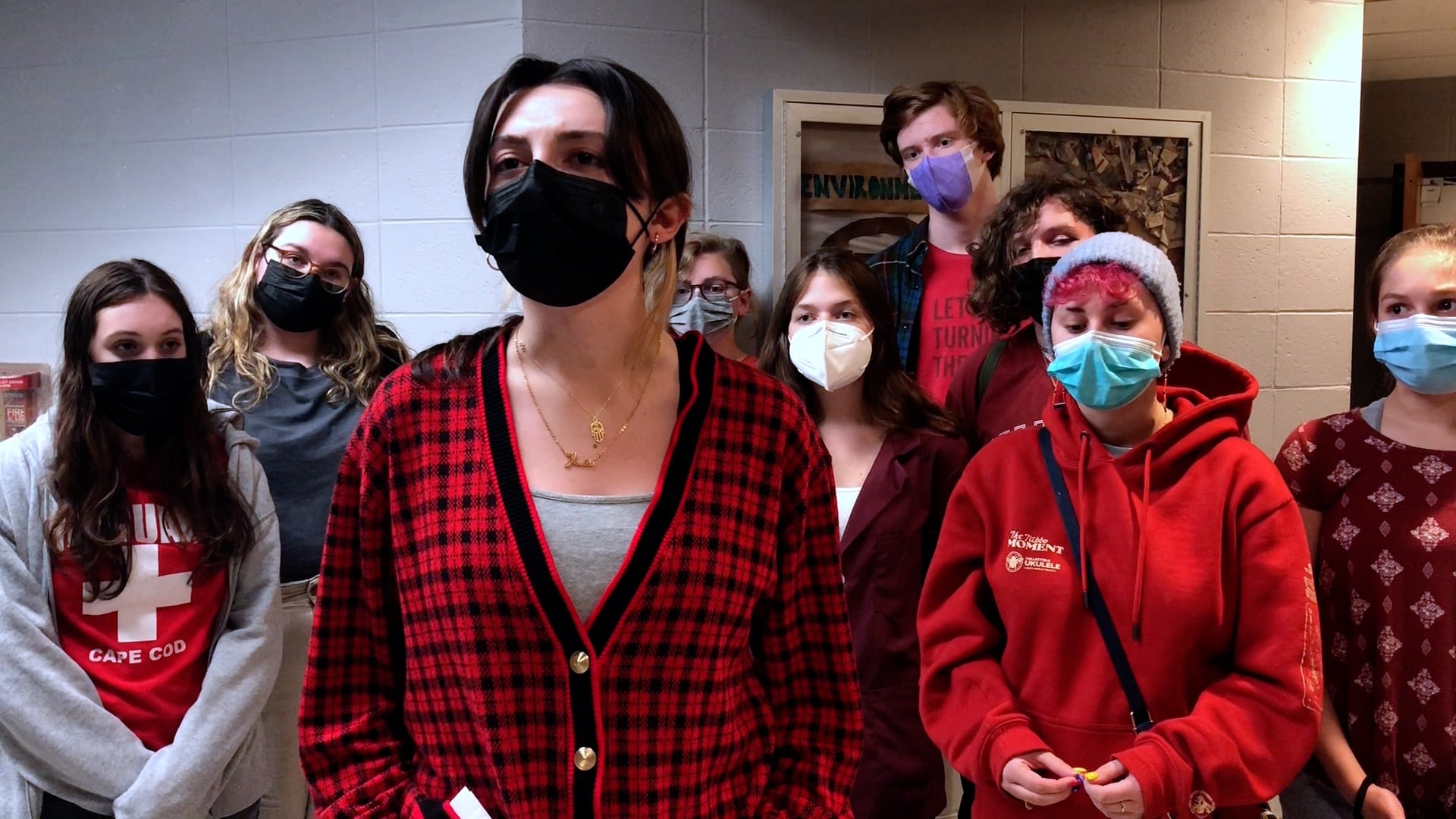 “Good evening,” said Mount Hope High School student and Mount Hope Student Union member Edda Petrillo, supported by more than a dozen of his peers. She was speaking at a meeting of the Bristol Warren Regional School Board Encounter. “I would like to start by saying that we are aware that we cannot go back on the decision made at the last meeting regarding the project-based learning grant. As Mt Hope Student Union, we are here to demand a change in the way this school board is run.

As Petrillo neared the end of her speech, the school board’s attorney called the time and tried to silence her. There was teasing from those present and requests to “let her finish!” These cries fell on the deaf ears of the chairman of the committee Marjorie McBridebut student Sophie Virgadamo, who was the next person to be allowed to speak, identified himself and ceded his time to Petrillo. Two lines and less than ten seconds later, Petrillo was finishing his words.

“What happened in the last meeting was racist, plain and simple,” Petrillo continued. “Yes, Mrs. Simpson Thomas, the host chosen by Dr. Deborah Dibiase, focuses on supporting black and brown students. However, just because she focuses on black and brown students doesn’t mean she’s ignoring other students or denying them an opportunity. Before talking about ‘what about all the pupils’, Ms Ellsworth said they, like the black and brown pupils at our school, deserved to be treated with respect. Yet the decision of this committee was far from any form of respect. You say we need to uplift all of our students, but when our community talks about the issues facing minorities in our community, you are nowhere to be found. We are not saying that other children do not need support. We say black and brown students need to be heard. It’s 2021. The vast majority of our population agrees that there is racial discrimination in our society and this proves it even more. Make all the excuses you want, but if you’re not supporting disadvantaged students, you’re not supporting the entire student body and ensuring their future success.

“It is amazing that this district receives so many grants given to us, yet this committee, especially a select group of you, consistently turn down said grants that we so desperately need. This district desperately needed this grant. The donated money was pending for more than three years, so why is the seller a concern now? This committee had been putting off this grant for an incredibly long time, so why wait until the deadline END? If even we as students can see that we need this money, then clearly there is a problem. All we hear is adults yelling at each other and, frankly, dishonouring this district whenever a major issue arises. If you can’t treat each other with respect, how can you expect us to respect each other? It’s really annoying.

“We have watched this committee consistently drop the ball when it comes to student community interests and their success in the global community. It is truly a privilege that we have such high graduation rates at this school, but, as Ms. Thibedeau pointed out at the last meeting, our college graduation rates are dropping dramatically. Has it occurred to you that this might be because we are not preparing our students for the outside world? That we prepare them to continue life in a bubble of whiteness and that when they leave we control them for their bigotry, for their homophobia, for their racism? As a committee, you are not here to advance your personal agenda. You are here to represent your community, many of whom want our education system to be better, to teach our students why they cannot be allowed to continue to be discriminatory and bigoted. As a committee, you are not acting in the best interests of the students, teachers, and administrators of this district. You mostly fail our students.

“I would like to draw a quote from Mrs. McBride, from when she was interviewed by the Students’ Union for her role which she still occupies this evening. Ms. McBride, you said that student representation is “essential”. That you “think we don’t have enough” and that “we need to build on this again.” Yet when members of this committee show blatant signs of bigotry and discrimination against these same students, you say nothing. You stand ready and help hurt the very students you are sworn to protect.

“The Mt. Hope High School Student Union has no faith in this committee and we demand that Ms. McBride, Ms. Ellsworth and Ms. Thibedeau, and any member who does not want to commit to protecting all students, step down. We also require that appropriate legislation be put in place so that the responsibilities, term limits and qualifications of committee members can be properly defined. We want you all to really think about why you are on this council and how you affect everyone in this district.

Petrillo’s comments come in response to last month’s Bristol Warren Regional School committee meeting, where members voted to reject a grant that would have brought in an expert, Simona Simpson Thomasto administer a professional development opportunity for teachers to learn about the needs of students of color.

UpriseRI spoke to Sophie Virgadamo and Olivia Neverka Vinciguerraco-founders of the Mt Hope Student Union, before the meeting.

UptakeRI: Can you give me some background on this?

Sophie Virgadamo: As a student union, we had some interactions with the school committee, not a lot, but we found them to be very adversarial. If you noticed, we met about three superintendents just over the summer. The members of the school committee constantly fought against anything that even smacks of progressivism. They were against a back-to-school mask mandate. They were adamantly opposed to putting off the start of a school day one day, because it was the day of Rosh Hashanah. [See: Groups threaten lawsuit over school year beginning on Rosh Hashanah]

Dr. DiBiase had received a grant of around $7,000 in 2018. They had been calling for this to be handled by the school board for years and it was swept under the rug until last week. During this meeting, the issue that some school board members said they had with the grant was who would administer the professional development days for this problem-based learning opportunity. Her name was Simona Simpson-Thomas.

In the past, Simpson-Thomas has worked on diversity and inclusion, professional development trainings,. Several school committee members had a big problem with this, culminating when council member Sheila Ellsworth confronted Dr. DiBiase and asked why she didn’t care about all the students. I felt that question was incredibly targeted and racist. Dr. DiBiase is one of the best principals I have had the good fortune to study with. All she does is keep busy. Ellsworth’s question was under the same rhetoric as “All Lives Matter.” As a student union, we have fought from day one for equity for all students, including minority students.

We have worked, in previous instances, with the superintendent and administration to achieve a more diverse history and English curriculum, which was later compromised into a diversity class in America. We’ve worked with them to fight for more time for students doing distance learning.

Olivia Neverka-Vinciguerra: We are not part of the school. We are separate and apart from that. We are a non-school-run student union. We work alongside the administration more than for it. We are essentially student advocates. If there is an issue or problem within the school and people feel comfortable talking to us rather than the administration, we report it to the administration from there.

Virgadamo: There are three members of the school council whom we think the only thing to do is that they resign. This is President Marjorie McBride, Vice President Tara Thibaudeau and Sheila Elsworth.

Neverka-Vinciguerra: Granted, the school is predominantly white, but there are a few minority students within the school. And not everyone identifies as straight at our school either. There is an LGBT community within the school and the school committee doesn’t like to talk about it. There are members in Union who are part of this community. We had an issue with one of our members speaking up in the past and he ended up having transphobic remarks made about him after the fact by adults in the community.

UpriseRI also spoke with Edda Petrillo after her speech to the school committee.

The meeting was interrupted twice, once when more than 150 teachers and their supporters, there to support their students but also to remind the school committee of the contract negotiations, came out en masse. Later, the more than 25 students present in support of Petrillo and the Mt Hope Student Union walked out.

Here is the Bristol Warren Regional School Committee’s official video of the October 25 meeting where the grant was rejected. The audio and video quality of this official meeting is quite poor: