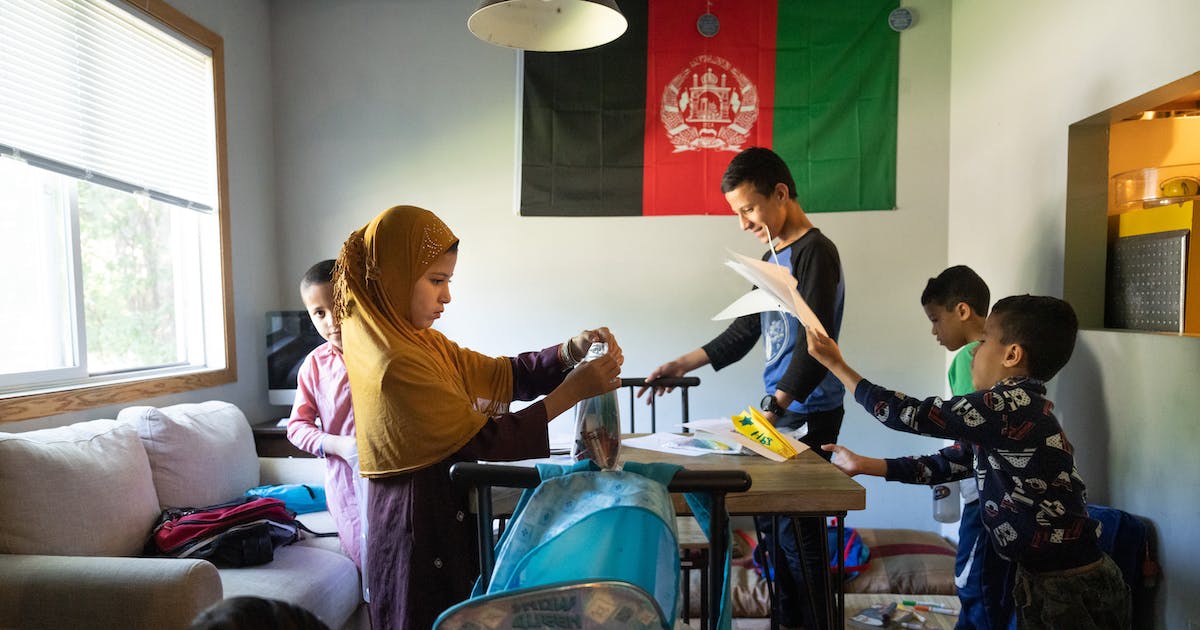 Summer school ended about two weeks ago for many of Muhammad Tayyeb’s eight children, but they are already asking him when they can return to class. They want to see their friends and teachers and they are eager to continue practicing English.

The Tayyeb children are among more than 200 Afghan students who have enrolled in public schools in Minneapolis over the past year. Many of their families fled Afghanistan in the days and weeks following the August 2021 takeover of the capital Kabul by Taliban forces.

“It’s a phenomenal program,” said Tayyeb, who sent his three oldest children. They had learned some English at school in Afghanistan, but not enough to speak fluently. “It’s a big challenge for them, but they surprise me with how quickly they learn,” he said.

Betsy Winzig, one of the teachers in the program, was also impressed with the students’ increased confidence in their English skills. During the last days of the month-long program, they chatted among themselves in English and even used the idioms and colloquialisms they had learned from their teachers. (Winzig found she had to say “oh boy” quite often based on how quickly her students started saying it.)

“They have so much joy and energy to learn,” Winzig said. “This is what all teachers expect of their students.”

The program included weekly field trips, including a visit to Fort Snelling and another to the River Rum. The students canoed, pitched a tent and learned to start a fire with the help of a scout troop.

Maryam Sharokhi, a 10th grader at Edison Secondary School, said she hopes to be able to apply her skills on a family camping trip one day soon.

“I had a lot of fun and my English is better now,” said Sharokhi, using her new language skills.

Sharokhi also learned to navigate public transport through the program and met new friends from around the world, as well as other Afghan students.

Winzig said one of her favorite moments was watching about 50 students sitting on a bridge in Theodore Wirth Regional Park with their legs dangling in the water. They held their phones just long enough to take pictures – they weren’t glued to their screens. Instead, they spoke in English and asked quick questions about the water lilies and seaweed by the water’s edge.

“It was just lovely,” Winzig said. “It was so clear that they really want to be part of Minnesota.”

In addition to lessons about the state’s history, landscape, and culture, Winzig prioritized taking time to ask students about their home country.

“It was important to honor what they left behind,” she said. “In the excitement of living in a new place, there is sadness and there is loss.”

The Tayyeb family has a large Afghan flag hanging in their dining room. A picture of the flag, with a few hand-drawn hearts on it, is pinned above their couch.

Back in Afghanistan, the family lived in a house with more than 20 rooms. They now live in a four-bedroom duplex in northeast Minneapolis. They had only had two days’ notice before leaving Afghanistan.

“It was like a dream,” Tayyeb said. “I didn’t expect the change so quickly. … We left our house, our car, all our stuff.”

But as he watches his children rummage through their backpacks and pull out folders full of worksheets, all filled out in neat handwriting in English, he thinks of the opportunities for his family and those he is with. work.

“Our life is different, but we are safe here,” he said. “My children can go to school and learn English to have a good future.”