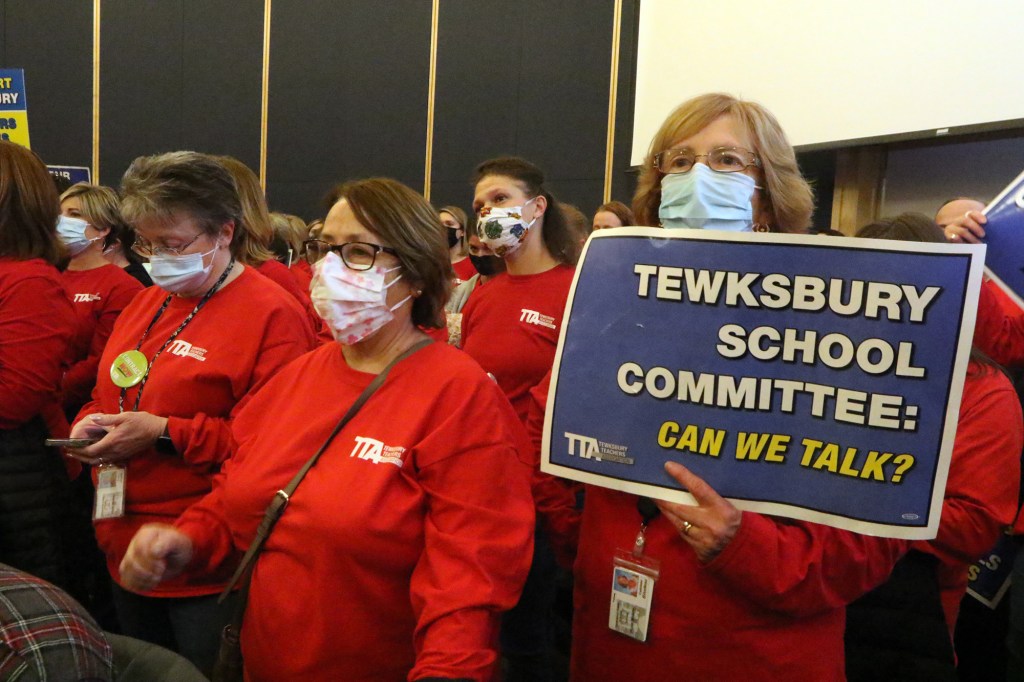 TEWKSBURY — The school committee received three complaints about the open meeting law following a meeting earlier this month that ended with all attendees being removed from the room.

At the February 9 meeting, more than 100 members and supporters of the Tewksbury Teachers Association showed up to speak to the committee about ongoing contract negotiations between the union and the school district, which have been in mediation since December. At first, committee chair Keith Sullivan had no intention of allowing them to speak at the citizen forum, as the contract was not on the agenda for tonight’s meeting- the.

Finally, several participants expressed their concerns until Sullivan closed the citizen forum. However, when TTA President Conner Bourgoin attempted to continue speaking, he was escorted out of the meeting by police. Bourgoin’s departure was met with cheers from the crowd, at which point Sullivan asked the officers to escort everyone out of the room for the remainder of the meeting.

On February 11, 14 and 15, three people present filed separate complaints under the Open Meetings Act against the committee, claiming that continuing the meeting behind closed doors after participants had withdrawn was unlawful.

“The action of clearing the room of every spectator, then closing the door and resuming the meeting with deliberation is, if not an action taken with the specific intent of violating the Open Meetings Act, then at the very least an action taken with willful ignorance of the requirements of the law,” wrote Deborah Wall, one of the TTA members who attempted to speak at the meeting, in her February 11 complaint. a public body, in particular a chairman, may order a person who continues to disrupt a meeting to withdraw from the meeting, and the said chairman may authorize the police to remove the disruptive person from the meeting, but to exclude each member from the meeting meeting, closing the doors and then continuing the meeting is a mistake and a violation of the Open Meetings Act.

Michelle Haley, a member of the Tewksbury Special Education Parent Advisory Council, wrote in her February 14 complaint that she could not be in the meeting room because it was too small for everyone present. When the crowd was withdrawn, they attempted to enter the room as a SEPAC update was on the agenda that evening, but were not allowed to enter.

She went on to say that if another woman was allowed in because she was going to talk about something on the agenda, Haley was not. As no one from SEPAC was present, the update was omitted from the agenda.

Doreen Healy, a Billerica resident who also spoke at the meeting, wrote in her Feb. 15 complaint that school committee members also whispered to each other out of range of their microphones during the meeting, preventing attendees from talking to them. to hear. .

Healy noted a moment during the meeting when committee member Nick Parsons, the only person on the committee who argued attendees should be allowed to speak and left the meeting when escorted, told the crowd that Sullivan had whispered to him that he would give five more minutes before ending the citizen forum.

“The basic premise of a public meeting is to allow the public to participate and be aware of the proceedings,” Healy wrote. “Whispers…deprive the public of those same rights.

All three plaintiffs asked the committee to apologize for alleged violations of the open meeting law and to receive further training on state law.

At a special school committee meeting on Tuesday, the committee addressed all three complaints, but no member commented and instead voted for the district attorney to respond to the complaints.