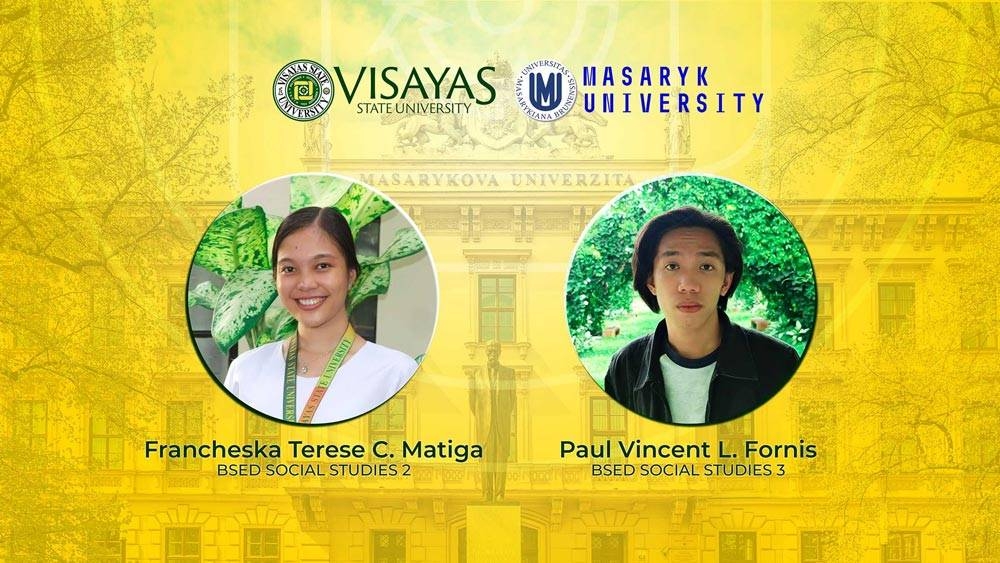 The three-week online summer program was offered by Czech Republic-based Masaryk University from June 28 to July 16.

In 1989, the collapse of the Berlin Wall was the culmination of revolutionary changes that swept through central and eastern Europe in particular.

Across the Soviet bloc, reformers seized power and ended more than 40 years of communist dictatorial rule. The reform movement that ended communism in Central and Eastern Europe began in Poland.

According to Dr. Bayron Barredo, Dean of the VSU College of Education, the two students in his department, Francheska Terese Matiga and Paul Vincent Fornis, represented VSU in this extensive summer e-learning program.

Barredo said Matiga, a sophomore, and Fornis, who is in his first year, are both studying a Bachelor of Secondary Education (BSEd) in social studies.

He said the students went through a rigorous selection process led by Jay Bansale, the social studies curriculum implementer in the teacher education program, to choose the most deserving students to represent the university in the short-term training program.

“We assessed their overall academic level [so that] we can represent VSU well to students who will be able to echo what they have learned in this international online summer program,” Barredo added.

He noted that the participation of VSU students in the program is an important way to provide international learning opportunities for their students.

As future teachers, it would be great if they understood how politics and economics work in Europe, which they could compare to that in the Philippines, Barredo added.

“Improving their knowledge is, I think, very useful and important because they can also pass on what they have learned to their Filipino classmates,” he said.

Matiga shared how joining said program has benefited him, especially in terms of networking with other international students.

She said her experience of the online summer program at Masaryk University opened doors for her to meet new people from different countries and even connected her to a large network of international students who also share her passion. in the careers they have chosen.

“Learning about the complex process of designing democracy from the perspective of another country has helped me see social science in a whole new light. These things have not only broadened my views, but also provided an understanding of the vital role of social sciences in our society,” Matiga explained.

Drawing lessons from the program, Fornis explained the importance of political literacy in learning and understanding how other countries build their version of democracy that can be a model in nation building.

He said the training gave him a unique understanding of how historical transitions influence the overall political landscape of Western countries.

“I can’t help but reflect on the Central European experience and somehow compare it to our own experience here in the Philippines. There are many parallels between their experiences there- low before their transition from communism to democracy to the current realities that we have here in our country,” Fornis said.

He thinks learning about these things made him think about some ways Filipinos can better enhance and protect the democratic institution.

Masaryk University has been a partner of VSU for several years resulting from the inclusion of the university in a European Union or EU funded project in 2010.

Masaryk University is the second largest university in the Czech Republic, a member of the Compostela group and the Utrecht network. Founded in 1919 in the city of Brno as the second Czech university, it now consists of nine faculties or academic departments with a population of over 35,000 students.

According to VSU President Edgardo Tulin, the university has been included in the Experts Asia program, an EU project that aims to build capacity for international cooperation among its participating countries in South and Southeast Asia. .

Tulin noted that the program has enabled VSU faculty members, staff and students to study in Europe for the advancement of academic and cultural exchange.

He said the same program had attracted several groups of European exchange students who had taken majors at VSU, a university in Baybay town, Leyte, with five campuses comprising eight colleges, three institutes and a graduate school. .