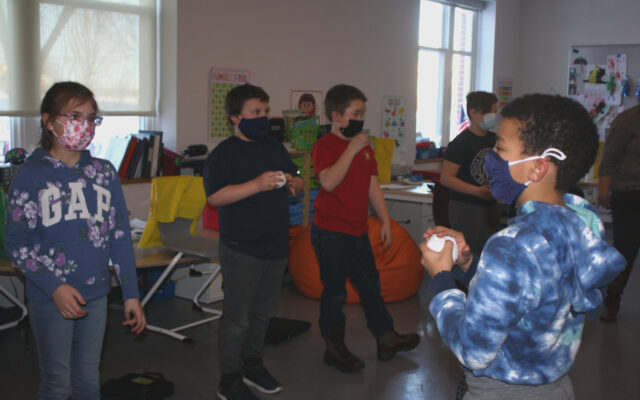 Like many children in the Power Hour after-school program at Caribou Community School, 10-year-old Benson Belanger is on a mission to learn French and forge stronger cultural ties with his family.

CARIBOU, Maine — Like many children in the Power Hour after-school program at Caribou Community School, 10-year-old Benson Belanger is on a mission to learn French and forge stronger cultural ties with his family.

Bélanger is one of 11 students who took French lessons with Caribou High School teacher Jonna Boure and several of her students throughout the month.

Long-time defender of French immersion programs in Aroostook, Boure sees Power Hour as an opportunity to bring the language back to elementary school students. Currently, there are no primary French classes and the college lost its French program several years ago.

Boure said she has already seen the students, who are all in grades 3 to 5, learn words and pronunciations quickly, showing how much easier they can pick up the language at a younger age.

“It’s important that they learn French early,” said Boure, who also teaches Spanish at the CHS. “Even after only three weeks, there are certain words and pronunciations that they remember without hesitation.”

Through hands-on games and activities such as acting, coloring books and Simon Says, Boure students learned basic French words and conversation skills. Boure also told stories about French Acadian history and culture and invited his members of the French Honor Society to give lessons.

Last Thursday, Power Hour students enjoyed eating ployes while listening to CHS senior Chloe Sleeper play Acadian music on her violin. Children learned how early Acadian settlers in the Saint-Jean Valley made ploye from buckwheat flour due to the lack of ingredients needed to make pancakes, which originated in their home country of France.

Sleeper also read his French play “Le Chat et La Lune” (“The Cat and the Moon”) while the students acted out the roles. Like many of his students, Sleeper learned French to communicate with the Acadian members of his family.

“It’s cool to see how much they’ve already learned,” said Sleeper, who has been taking French lessons since seventh grade. “Some of them practice at home, and that shows how important it is to teach them while they’re young.”

His classmates Michael Cyr and Michaela Spooner have also studied French since middle school. Both students noted that teaching French is one way to ensure Acadian culture stays alive in northern Maine.

“Watching them learn the language reminds me of when I first started learning and it makes me excited,” Cyr said.

Spooner said she remembers feeling motivated to learn French in order to communicate better with older, more fluent speakers in her family.

“I grew up hearing my grandmother speak French,” Spooner said. “It’s a language I would like to see saved.”

Although the current Power Hour session ends in February, Boure hopes to continue French lessons after school or on Saturdays. The children enjoyed learning from the high school students, she said, and would benefit from more language practice.

One of his students, 10-year-old Isabella Goodwin, became so interested in the language that she borrowed Boure’s copy of a French-language book on Legos and looked up French names in her books. favorite books, including “Harry Potter”.

“It’s cool to learn another language and experience different cultures,” Goodwin said. “I like teaching French to my brother and my sister. My sister knows certain words.