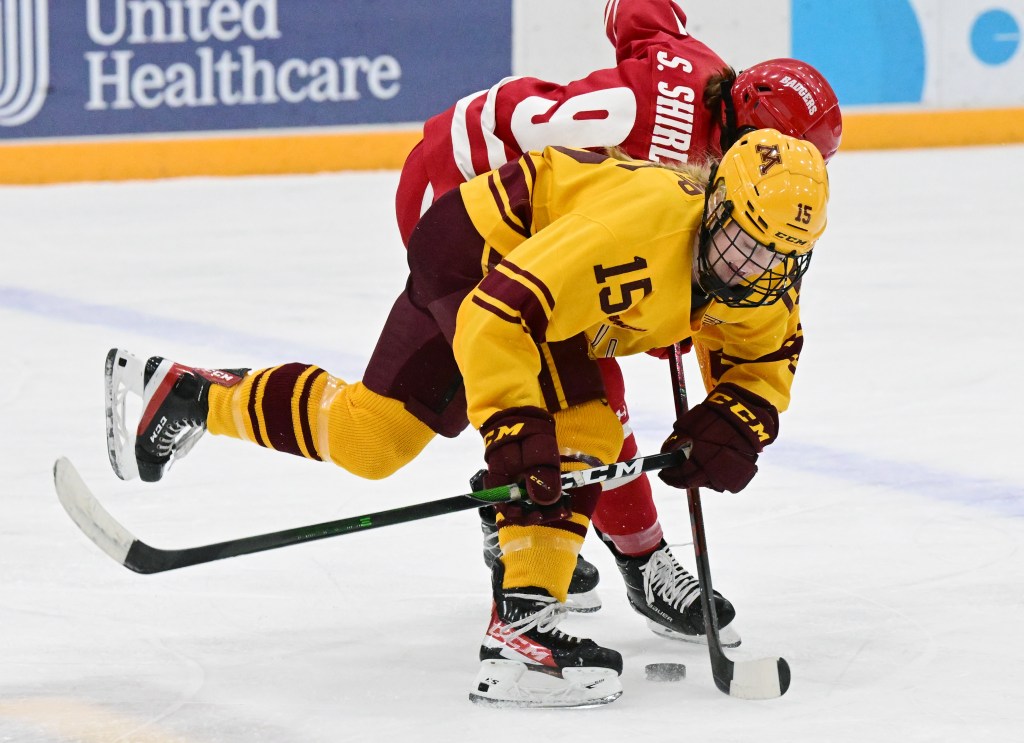 After the Gophers women’s hockey team’s 8-2 victory over St. Thomas on Jan. 9, three players met near center ice to make up for it: Peyton Hemp of Minnesota and Maddy Clough and Maddie Jurgensen of the Tommies .

All freshmen, all from Andover High School.

It’s an impressive feat to send three players of the same class to Division I hockey.

Andover, in fact, sent eight players from last spring’s state tournament runner-up to college hockey this season, including six at the Division I level.

“We knew we had a really special class with a lot of talented players,” said Clough, a Tommies blue understudy, “but it was more about friendship. Playing college hockey is a common goal at Andover. .

Equally impressive is the fact that Andover lost all of those players but enters a section final on Thursday against Elk River/Zimmerman (14-12-1) with a 26-0 record and ranked No. 1 in Class 2A.

“We’re really lucky because there’s a trickle down effect on leadership,” Huskies coach Melissa Volk said. “We have these large freshman classes, or even smaller freshman classes, and we have great leaders, so they know the environment and what’s expected. Then all of a sudden they’re the leaders and they’re showing it to the other kids.

That played a big role this season for the Huskies, who lost two of the state’s top players, Gabby Krause of Hemp and Minnesota Duluth, to graduation and nearly their entire blue line. Still, the Huskies are the only undefeated Class 2A team.

Andover youth hockey, with which Volk and the Huskies are heavily involved, recharges the team each year.

Ella Boerger, a junior forward committed to St. Thomas, leads the Huskies in goals (27), assists (35) and points (62). Goaltender Courtney Stagman has a 1.04 goals-against average and a .947 save percentage. Cailin Mumm, the lone defensive returner, leads the blue line.

“We knew we were going to be successful,” Volk said, “but I think we were going to play the underdog role a bit more this year, which technically we still are because we’re still inexperienced. We have seven (people elderly) in our program; on our university list, we have five.

On the other hand, the freshman class won the state under-15 championship last season, and by the time the players get to high school, they’ve been teammates for years.

“We do a lot of off-season (hockey for young people). We’re pretty active with the kids,” Volk said. “We do a lot of youth events with our high school team, and then in the summer they all skate with me.”

Meanwhile, players from Andover Minnesota (24-7-1) and St. Thomas (5-23-1) prepare to meet in what will likely be the next four games. Game 2 is scheduled for a puck drop at 4 p.m. Saturday at Ridder Arena. If the Gophers sweep — they’ve won the last two meetings by a combined score of 16-2 — the teams will start the WCHA playoffs with a three-game first-round series at Ridder.

Hemp scored the first goal of the season for the Gophers and has 11 goals and 17 assists this season, leading a strong freshman class that includes winger Ella Huber, blue back Emily Zumwinkle and goaltender Skylar Vetter.

“That first goal took a load off my shoulders for sure, because it’s something every freshman thinks about, wanting to get that first goal,” Hemp said. “So I was definitely more comfortable after coming in on that first one, but it’s definitely been an adjustment. I think all freshmen now have just acclimatized and feel like they’re a part of the team. I feel like everyone is one now.

While wins have been scarce at St. Thomas, which made the jump from Division III to Division I this season, the team has clearly improved. On February 11, the Tommies lost to No. 5 UMD 2-1 in Duluth. On January 31, they lost to No. 2/3 Wisconsin 3-1 at home.

“At the start of the season we knew we would be playing some really good competition, so we really weren’t aiming to go unbeaten,” Clough said. “We wanted to learn and grow and start the building blocks of a growing program. Even if we don’t win a game, we celebrate the small victories.

For example, a forecheck against Wisconsin forced the Badgers to call a timeout and reset. Assistant coach Bethany Brausen, a backup while Joel Johnson coaches Team USA this month at the Olympics, made sure her team understood what just happened.

“We maintained some offensive zone time,” Clough said, “and when we were on the bench, Bethany said, ‘How cool is that? It’s the first time out called and it’s not us who call it. ”

As for four more games against Minnesota, go for it.

“We’re very excited to be in the WCHA and Division I in general,” Jergensen said. “We have the opportunity to face the No.1 team in the country not twice, but six times. We are delighted and we feel ready for the challenge.