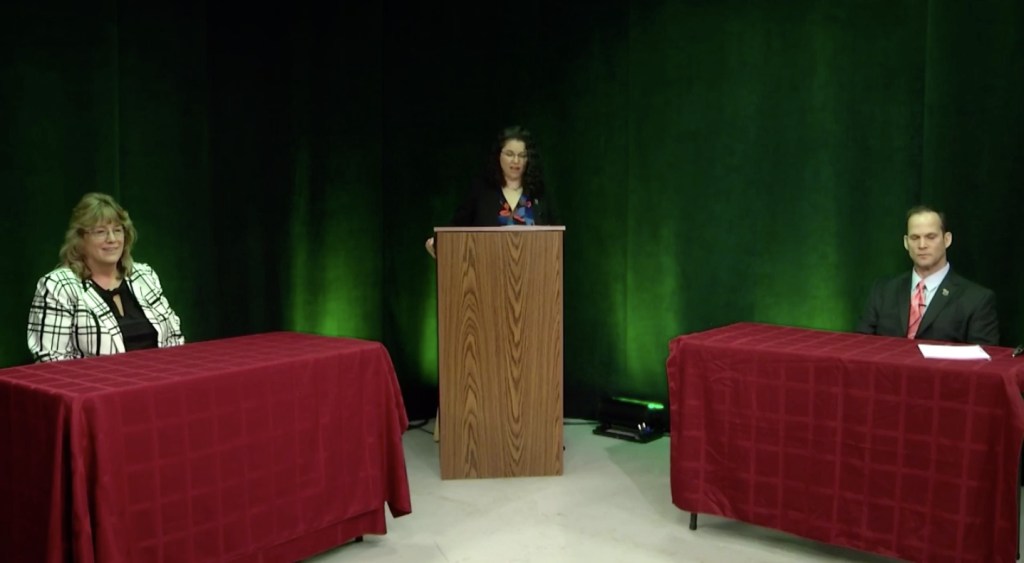 BILLERICA — With the city’s annual election approaching on Saturday, April 2, candidates for the school board and school committee participated in debates this week to discuss their plans and goals for the city.

Board member Kim Conway, the only incumbent to run for one of two three-year seats on that board, spoke with Planning Board Chairman Mike Riley about issues of current affairs, including water and sewer rates, affordable housing, unused city properties, and retention of city employees.

School committee member and Select Board candidate Darlene Torre did not attend the debate, which was organized and broadcast by Billerica Access Television.

Conway and Riley both agreed that Billerica should retain properties in its portfolio, including the former Ditson and Vining school sites, which are currently used as open space, a topic that has been frequently discussed on social media. Conway pointed out, however, that there had been no discussion of selling any of the properties, despite concerns from some residents that the idea was on the table.

“I know it makes for big headlines to say, ‘I won’t let properties in the city sell’, but there are no plans to sell any of these properties,” she said. “I will advocate keeping these assets in our portfolio and using them as needed.”

Riley suggested the city consider using some of its unused lots for affordable housing, which Billerica desperately needs, but any use of the land would require community input.

“If you have an acre of land where it does nothing, there is no possibility of using it for a school or for a resource for the city, look at that land and ask for a proposal for a developer to come and gives us one for one,” he said. “If you want to build a house, you give us an affordable house. houses. “

Conway said the city needed to have a strategy to create affordable housing, which was mentioned in Billerica’s master plan.

In a discussion of recent turnover in city departments, Conway again brought up Billerica’s lack of a human resources manager, something she’s been advocating for the past few years. She said while it’s important to compensate employees fairly and treat them with respect to retain them, it’s also important to have someone whose day-to-day responsibility is to manage employee relations.

“The role of this HRD is not only to organize interviews or go and recruit. It’s to take the pulse of the workforce,” she said. “It’s about understanding what’s hindering their success. How do we develop their skills? How do we grow the individuals we have? »

The two candidates also agreed that the city should continue to increase water and sewer rates each year to avoid a situation where they remain flat from year to year before having to increase significantly to cover the costs. Riley told an anecdote from when he was a young adult and didn’t pay a bill on time, and later had to pay far more than he otherwise would have.

“Someone said to me, ‘I can’t make you do what you don’t want to do. I can only make you wish you had it,'” he said. pay for it year after year, you don’t have to worry about getting it in one big bill.”

At a debate held for school committee candidates, all of the candidates spoke about the importance of respect and transparency between committee members and the rest of the school district.

“If there’s a problem between the board members, they have to check that at the door and come in and do the job we were elected to do,” said Annette Famolare, the sole incumbent in the race. “There can’t be an ‘us and them’ mentality. … If you disagree with someone, that’s fine. It doesn’t mean you have to fight with each other.

Gonzalez said one of the most important parts of the school committee’s job is transparency, and “making sure everything they say and do and vote on and motions passed are implemented by the superintendent.”

“If not, try to find out what went wrong and what you can improve,” he said. “A lot of what you’re going to have to rely on is feedback and that’s going to come from schools and individual teachers.”

Michaud said what she enjoys as a parent are the conversations with committee members as they explain the process they follow to bring about change in the school district, especially when it’s not possible to see immediate results.

“When you’re trying to work on something and a member of the school committee shows you that they really care about you and want to help you do it, you feel like you’re doing something,” said she declared.

The candidates all agreed that the district, like others in Massachusetts, needed more help from the state and said they would advocate for more funding for Chapter 70 schools to come to fruition. Billerica.

“The other part of our role is to take a step back, a broader scope, and if we see issues like Chapter 70 funding that’s basically been funded at the level for years, we should speak up,” Kleschinsky said. .

He added that the state and federal government had made an effort during the COVID-19 pandemic to provide more funding, which would soon run out.

Candidates also praised the work done by parents and school community volunteers for helping to shape the way the district operates. Gargalianos listed several examples from his time in parent-teacher organizations where change was brought about by the persistence of parents who cared about their children’s educational experience.

“There’s always something you can’t get, but you can try to work together,” she said.