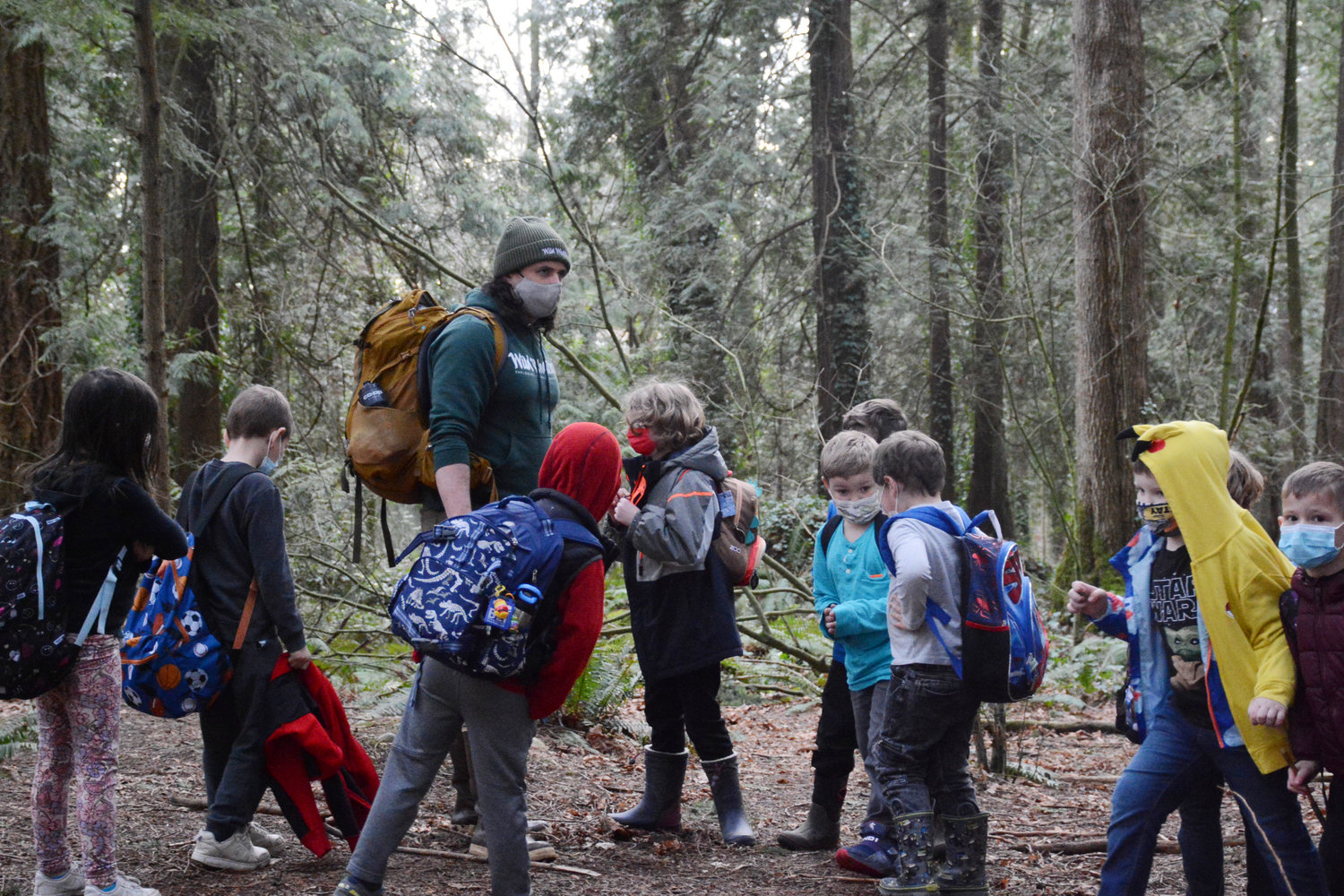 Blaine students learn in nature through an outdoor after-school program

Twelve children and two mentors stand in a circle under a covered area in Lincoln Park as they enthusiastically introduce themselves. The group has just started their second session of Wild Whatcom’s winter after-school program. As K-2 students have already had a long day of school, they’re heading into the woods to enjoy a socially distanced snack before exploring.

The nonprofit’s programming in Blaine is the result of state Rep. Alicia Rule (D-Blaine) securing state funding for the program. With state grants, Rule provided outdoor programs for children in the Blaine and Mount Baker school districts.

“During this pandemic, I knew it would be incredibly important to get the kids outside,” Rule said. “Children need to be outside not only for their physical health, but also for their mental health.”

Rule said she was inspired by the work of the Connections program, a pilot program during the 2020-21 school year, which ran in conjunction with the North Cascades Institute and various other organizations. Some kids in her neighborhood participated in the program, and Rule said she saw the benefits it had for them.

The Connections program originally focused on helping students struggling with online learning, but as classes shifted to hybrid, it shifted to outdoor instruction.

Blaine School District Superintendent Christopher Granger previously said The aurora borealis in an email about the Connections program that the school district was grateful for the unique program.

“This program has provided our students with the opportunity to participate in hands-on, outdoor learning in support of their classroom content,” he wrote. “We value the community partners and collaboration to provide this for our students, and believe it models what can happen when people come together and work together.”

Wild Whatcom’s program is specific to the Blaine School District. The organization typically offers programs during school hours, but the district thought an after-school program would be best because of the difficulty of resuming in-person classes during the pandemic.

The after-school program is intentionally less structured, Sahagun said in an email, because students come from a long day of sitting in classrooms. The main goal is to connect students to the outdoors through exploration, play, art and nature activities. “It can range from learning about and finding insects, to a camouflage-based game of hide-and-seek, to creating nature art in the park,” she said.

Sahagun said spending time outdoors has several documented mental and physical health benefits for all ages. In the after school program, students have the chance to cool off, exercise and connect with their peers while discovering and connecting with a nearby park.

Registration for the upcoming spring session will open with a list of interest rather than a registration, Sahagun said, which will give Wild Whatcom the opportunity to prioritize the registration of eligible families to free or reduced prices.

“For this year, we are grateful for the support of Representative Alicia Rule and the Office of Recreation and Conservation so that we can offer this program free of charge,” Sahagun said. “We hope to reach the most needy families.”

Rule said she had her own children enrolled in outdoor education programs even before the pandemic. As a mental health professional, she said she knows the benefits of going out.

“It’s really just a stepping stone to the Outdoor Education for All program,” Rule said, referring to HB 2078.

Rule sponsored a state outdoor education bill, HB 2078, which has already passed the House and is currently in the Senate. The bill would establish a statewide grant program to ensure that all fifth and sixth graders can benefit from an outdoor education. It would also create a position in the Office of the Superintendent of Public Instruction.

“What we did in Blaine was a small pilot project compared to what we want to do statewide,” she said. “I’m glad Whatcom is still a pioneer in these areas.”

Sienna Boucher contributed to this article.