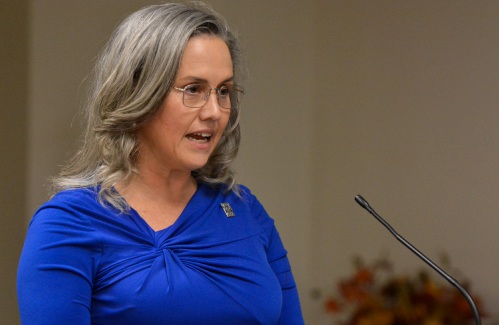 EASTHAMPTON — Following her stated intent, Mayor Nicole LaChapelle on Wednesday filed two complaints under the Open Meetings Act against the school board with the Attorney General’s Open Government Division.

Discussion surrounding a non-binding ‘good faith’ agreement between LaChapelle and the committee was cut short on Tuesday night after the mayor said she intended to file two complaints under the Open Meetings Act of the state.

“I would just like to say that as a member of this body, I abstain and strongly oppose any conversation about this and will follow up with the state,” LaChapelle said. “And I want this recorded. And now it is.

In the other complaint, LaChapelle described how on Tuesday School Committee Chair Cynthia Kwiecinski and Superintendent Allison LeClair sought to discuss ongoing conversations related to a “good faith” agreement between the City Council, LaChapelle, LeClair and the school committee regarding the FY23 school budget. LaChapelle said she didn’t think the “FY23 budget” accurately described the topic.

“The president did not share the draft agreement with the public before or during the meeting. The letter in question is not related to the school’s full budget process for FY23,” LaChapelle wrote in the second complaint. “A member of the public viewing the agenda had little indication of what would be discussed under the ‘FY23 budget’.”

The impetus for the deal arose when two school committee members and a city council member initially reached out to discuss the $560,000 shortfall between LaChapelle’s proposed school budget of $17.89 million. and the $18.45 million requested by the school department.

A back-and-forth ensued at Tuesday’s meeting as Kwiecinski disagreed with LaChapelle’s claims and sought further clarification as she believed the deal was in fact part of the budget discussion.

School board member Megan Harvey also said she was confused by LaChapelle’s complaint.

“We can’t post a letter until we’ve agreed to the terms and voted for our president to sign it, but we can’t talk about it until we’ve posted the letter. Please help me clarify and understand,” she said.

LaChapelle reiterated that the agenda should include a description of a good faith letter.

“I’m just flabbergasted. I really am,” Kwiecinski said. “I thought it would be a very positive meeting where we would talk about the communication and the collaboration that we’re creating within the city. I don’t understand why that doesn’t fit into this conversation. … I’m at a standstill.

After another tense back-and-forth, school committee members decided to hold an emergency meeting on Wednesday, which doesn’t require 48 hours notice of posting before a meeting.

LaChapelle asked the attorney general to provide an opinion on his two complaints to determine whether the school board violated the state’s open meeting law.

Emily Thurlow can be contacted at ethurlow@gazettenet.com.