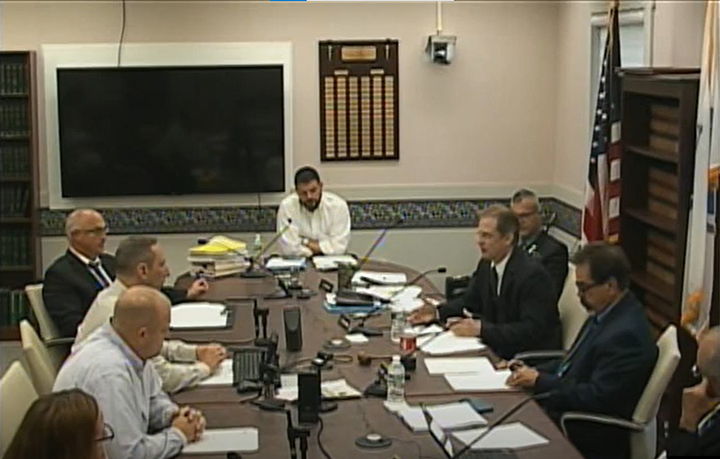 LUDLOW — The Board of Selectors and the School Committee met in a joint meeting on September 20 to discuss the school budget.

Board Chairman Antonio Goncalves said, “It was about time the two boards spent a little more time together. The school budget represents a large part of the city budget.

The school budget currently represents 47% of the city’s overall budget.

The Breeders Council and School Committee seek to meet and discuss the budget quarterly with another meeting to come before the end of the year. School Committee Chairman Chip Harrington mentioned how difficult the budget cycle can be and that he wanted to be able to get on the same page with the Select Board. “We are now closing 2022, we are starting 2023 and this process is preparing us for 2024, so we are dealing with three exercises,” he said.

Harrington explained how the new superintendent has new plans to change the budget process as well. He said: ‘The old budget sub-committee was made up of two community members who would meet with the superintendent and decide everything without us knowing. He [Frank Tiano] will now bring the ideas to the whole school committee to inform us.

Superintendent Dr. Frank Tiano said he wanted to be able to present the budget early this year and be as transparent with the committee, board and public. He said: “We want our sub-committees to work out budget priorities in advance so that we can submit a draft to the school board by January 5 and can release that draft to the public by January 10. ” He also wants to integrate teacher departments so they can create a tighter budget with fewer transfers next year.

The Board of Selectmen was very pleased with the meeting and appreciated the efforts of the superintendent and school committee. Since the school budget is almost half of the city budget, they said they liked the idea of ​​being able to see every line transfer and know if there was any extra money. in the budget. Board Member Bill Rosenblum said, “It’s refreshing to see we’re moving in the right direction. I think it’s good for everyone involved and in the city to know where the money comes from, where it goes and what it is used for.

Vice Chairman James Gennette added to this and said: “The mood of this meeting shows how we will work together moving forward, the whole Board will now be aware and I will only thank you never enough.”

Goncalves ended the meeting by asking two questions the city has asked the council a lot. The first was, “What’s going on with the terrain?” Looks like no one is paying attention. The land he was referring to is the one adjacent to Harris Brook Elementary School.

Secretary Sarah Bowler, who is also part of the building committee, said: “We had a very hot and dry summer and the seeds are not growing the best in these conditions. We also cannot install irrigation there because of the proximity to the river and the lack of water means that grass cannot grow. It’s a work in progress and people are currently re-seeding it and hoping for a better result.

The next issue Goncalves brought up is traffic and how “rough” it is to drive around schools during drop off and pick up.

Tiano said: “We will look into that. Nikki Reed, who is the main one, tried her best to get people out of there as quickly as possible. I worked from high school and sometimes I see lines of cars waiting at 2:20 [p.m.] for a school that lets students out at 3 o’clock. There are many different reasons why children did not take the bus, such as the bus driver being out with COVID-19 or the bus timetable not working with the activity schedule extracurriculars of a child.

Tiano added: “As we come back from COVID[-19], a lot of people didn’t feel comfortable putting these kids back on the bus and got into the habit of picking them up and dropping them off. This is still something that Tiano and the school committee will continue to investigate to help reduce traffic.

The Board of Selectmen continued to meet with Director of Human Resources Carrie Ribeiro to discuss a possible new non-union classification plan.

This helped Riberio gain some insight into what a pay raise would cost the city for positions that the studies found unfair. The final report showed a “compensation comparable” for each position and the data was based on internal and external actions. Some internal equities were the standings compared to others in the town and external equities were based on population, tax rate, budgets, school and town composition of surrounding areas, and proximity to Ludlow.

From the collected data, the new classification plan was created with some new job descriptions. A common class survey was conducted for all non-union positions with approximately 29 positions surveyed.
Riberio said, “We have our contract employees and unionized employees who are reviewed every three years and their raises keep going up. We have a group of people who don’t move because they’re not unionized and don’t have a contract, so they’re not being screened and the gaps are getting bigger every year. These are the people this study focuses on.

From the study, a classification plan was developed that would organize jobs by grade rather than by department. The proposal includes management grade one through eight and non-union custodial, senior computer technicians and more grade one through twelve. This would clearly show what level each position would be at. Riberio said: “What we have now goes by department and there is room for adjustments. Our proposal goes by grade instead of department and makes it more organized and less confusing. I understand that there is still work to be done on this.

The Board of Selectmen and Riberio both agreed it was a good start but there was work to be done on the ladder. Riberio was just looking to get a feel for the board and go from there to a final proposal.