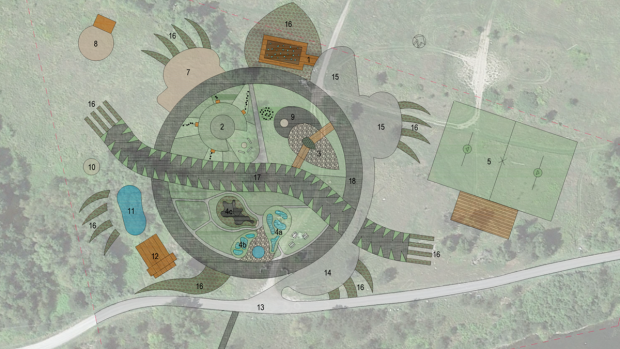 TYENDINAGA, ON., — An Indigenous organization in Tyendinaga, Ont., is asking the federal government to help build a new language and culture center on the territory because their language is threatened with extinction.

The group called Tsi Tyónnheht Onkwawén:na is a Mohawk language school and has been helping serve the Tyendinaga territory, south of Belleville, for over 17 years.

Executive Director Callie Hill says they want to see the creation of a permanent school called Kenhtè:ke Language and Cultural Centre, to help teach prospective students and support the community.

Brittany McBeath has been learning the language with the group for two years.

Mohawk on her mother’s side, she says her great-grandmother was the last to speak it in her mother’s family and she sought to get it back.

An artist’s rendering shows the planned building. The land is shaped like a turtle, an important animal representing Mother Earth to the Mohawk people. The building would cost around $10 million.

Hill says it would have classrooms, art studios, a rooftop medicine garden as well as a working kitchen.

“We will be able to do country food and food sovereignty and that kind of stuff. We will have a common space, where we can have meetings, celebrations or workshops to help educate,” she said. adding that the proposed center would be for people from outside the community.

More than eight acres of land in the territory were given to the Tsi Tyónnheht Onkwawén:na to build the new center.

The building itself would also emphasize sustainability and the environment, Hill says.

The group has been working in donated spaces for 17 years.

This project of creating a permanent home becomes ever more urgent as Canada learns more about the residential school system that was designed to erase Indigenous culture.

Curtis Maracle is a member of the Mohawks of the Bay of Quinte and says it’s vital for the community.

“Our identity is in our language,” he explains. “A permanent place where we know where people can go, and it would probably give the language group here some pride in having their own location. Not having to worry about finding other places around.”

Hill says with few first-generation speakers in the area, they want to give children and adults access to their heritage and who they are.

Hill says that although they have had discussions with the federal government, no funding has been committed so far.

But still, it gives hope to students like McBeath.

“I want to be able to teach my kids from an early age so they don’t have to learn it in their adult lives like I did.”