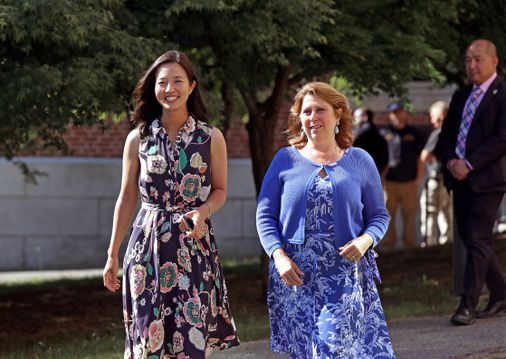 School Board Names Next Superintendent of Mary Skipper Boston

She has served as superintendent of Somerville District, which has approximately 4,700 students, since 2015.

Skipper was unavailable for comment after the vote. But she once said teachers were surrogate parents for her, playing an important role in her life, so she felt teaching was something she should do.

The work she is undertaking has already been largely redefined by a deal finalized this week between Mayor Michelle Wu and state Education Commissioner Jeff Riley, who had threatened to label the district an “underperformer.” In return for maintaining the district’s autonomy and reputation, Skipper will have to carry out a long list of mandates from a district improvement plan agreed to Monday that aims to overhaul special education, services for learners in English and transport, among others.

“The work with the [state] is serious,” said Jeri Robinson, chair of the school board. “To do the job, we need a strong leader who has worked with [the state] and who was superintendent.

Skipper’s selection could pose some risk for the district, as she is not available to take over full-time in Boston until late September, past the deadline to complete 10 of the 24 action items required by the joint agreement for the improvement of schools in Boston.

Skipper will also have to overcome frustration from some community members that the superintendent’s search did not yield black or Latino finalists. Civil rights leaders and education advocates have called on district leaders to halt voting or prolong the process after the search committee presented only two finalists; Skipper is white and Welch is Asian American.

Two other potential finalists, a black woman and a Latina, withdrew before the list was finalized and made public. The panel overseeing the search selected Skipper and Welch from among 34 applicants.

School committee members echoed the frustration, adding that the search was too rushed to make an informed decision.

“I wouldn’t hire someone with the information I have now for my own organization,” said Cardet-Hernandez, who runs a private school for students with special needs.

Ultimately, frustrated school board members said the vote should go ahead to bring stability to the district.

During testimony before the committee on Wednesday evening, members of the public were split in their support for the two finalists, with more in favor of Skipper.

“She’s a team builder and takes a collaborative approach,” said Boston Latin Academy professor Jose Valenzuela, who served on the search committee. “She has the proven superintendent experience needed to begin the hard work of rebuilding trust.”

Skipper’s supporters also pointed to her experience as a superintendent.

“There is only one candidate who has worked to negotiate one of the best contracts for teachers in Somerville, and that is Mary Skipper,” said Darlene Lombos, BPS parent and executive secretary-treasurer of the Greater Boston Labor Council.

Welch, who oversees 15 schools in East Boston, Charlestown and North End, has received support from parents and teachers in his area.

“We want action. We want authenticity and we want a superintendent who will be on the front line to implement change,” said BPS mother Jane Reilly.

Alex Oliver-Davila, executive director of Sociedad Latina, called for Welch’s nomination in part because he speaks Spanish, is biracial and is raising multiracial children, and “represents the future of this city.”

Skipper will be guided by the joint agreement finalized this week by the city and state and under pressure to act quickly. She will not have the freedom to set her own priorities as most superintendents do when they take office.

For example, when outgoing superintendent Brenda Cassellius came to Boston in 2019 after a career mostly spent in Minnesota, she visited dozens of schools and held dozens of meetings with parents and community groups before developing her plan. strategic.

But some veteran superintendents said it might be helpful to go into a large district like Boston with a clear consensus on school system priorities and an agreed-upon checklist. between state and city that dictates where to start.

The five-page state plan “would help target a new superintendent,” said former Chelsea superintendent Mary Bourque, who now leads government relations for the Massachusetts Association of School Superintendents. “It becomes everyone’s priority when it’s phrased that way. Otherwise, there is no movement.

And the document would give a new leader a “cover” to make tough changes, education watchers said, particularly on how the district serves children in special education and students learning English. , which would likely affect teachers and may require their contracts to be renegotiated.

If Boston doesn’t follow through with the plan, however, the state could still take action to designate the underperforming district or take control of the district’s management.

At least one member of the State Council for Elementary and Secondary Education, which met on Tuesday and is expected to approve either of these measures, wanted the state to keep the pressure on the BPS.

“To say the least, I’m skeptical,” said board member Michael Moriarty. “Going forward, if there is any sense of intransigence about the vital work that needs to be done, I implore you, Commissioner Riley, to drop the other shoe and recommend receivership. For the sake of children and families, I hope my skepticism is unfounded.

The Big sharing is an investigative team that explores educational inequality in Boston and across the state. Sign up to receive our newsletterand send ideas and advice to thegreatdivide@globe.com.