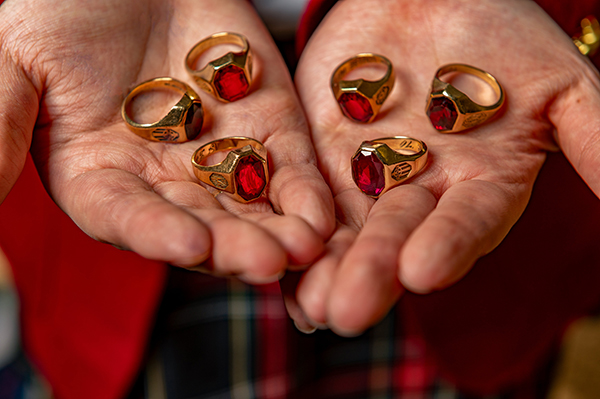 BALTIMORE (CNS) – Alice Chen did not expect to receive a class ring at Mercy High School in Baltimore this school year.

With family resources depleted due to a business fire, the eldest had no extra money for the cherished school symbol.

In September, however, Chen donned an “inheritance ring” donated by Celeste McGinnity Skinner of the Class of 1968. It fitted perfectly and now remains on Chen’s finger.

Chen said she was ‘overwhelmed with a wave of shock and immense gratitude’ when she learned of Skinner and the Mercy heirloom ring Skinner gave to the school. to be passed on to a deserving student such as Chen.

“Receiving a legacy ring adds a layer of connection to past graduates and a commitment to being a ‘Mercy Girl’ that you wouldn’t otherwise feel,” Chen said. “The ring is a representation of strong, compassionate and independent women who have come before me. It allows me to live up to that standard.

Skinner moved to Louisiana about 40 miles north of New Orleans a few years after high school. She had a 37-year career as a social worker in child protective services while raising two sons.

She spontaneously took off her Mercy ring and returned it to school as she attended her 50th class reunion.

“It was a touching moment for me,” Skinner told the Catholic Review, the newspaper of the Archdiocese of Baltimore. “I wanted to give my ring to someone who would carry on Mercy’s legacy.”

The Mercy Legacy Ring program began in 2003 when a Class of 1964 was given to the school, according to Karen Maimone, director of alumni engagement at Mercy and a member of the Class of 1992.

About fifty rings have since been offered and the old ones bequeathed their rings by will. Mercy rings are also passed down from grandmother to mother to current Mercy students.

“The Circle of Mercy is truly timeless,” Maimone said.

Chen is a Catherine McAuley Scholar and Fellow of the National Honor Society. She enjoys a plethora of school activities, including producing immigration podcasts with two of her classmates for their senior project.

“Being a ‘woman of mercy’ means we are called to challenge evil, stand up for what we believe in, pursue our goals, and leave our footprints behind for the next generation to follow,” Chen said. “It means bringing out what it means to be a Mercy girl both as a citizen of the world and a good member of the Mercy community.”

Chen’s future interests include studying biology and neuroscience and exploring linguistics and ethnic studies. Her long-term goal is to become a doctor and bring health care to historically excluded communities.

Chen said the letters and gifts exchanged with Skinner represent “the beginning of bonding.”

“I’m so grateful to have this special relationship with her (Skinner) and see her as a role model who embodies Mercy’s values,” Chen said. “It drives me to pursue my goals relentlessly.”

Skinner, 71, noted that she never lost her bond with Mercy. She participates in weekly Zoom chats with former classmates living in Maryland, California, New Mexico and Kentucky. Up to 20 classmates join the video chat to reminisce and share stories.

Skinner now hopes to meet Chen in person during a spring trip to Baltimore.

“Knowing what meant so much to me can mean so much to someone else brings me to tears,” Skinner said.