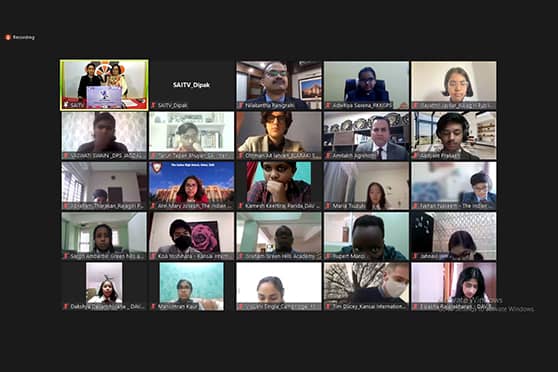 Schools from China, Pakistan, Kenya, Morocco and many other countries participated in the virtual debate competition

Participants discussed the future of artificial intelligence, the effect of the COVID-19 pandemic on the climate, and how robotics could impact human life in the future

Students from more than 10 countries, including China, Pakistan, Kenya and Morocco, participated in a global debating competition recently organized by SAI International School in Bhubaneswar.

A total of 49 Indian and foreign schools took part in the debating competition, the aim of which was to develop communication skills, critical thinking and the ability to collaborate in children, said a press release from the SAI International School. .

The British High Commissioner to India, Alex Ellis, attended the debating competition as a guest. Addressing the students, he said, “Global problems require global solutions. These issues can only be resolved through deliberation and discussion.

He spoke about the importance of incorporating topics related to climate change, cybersecurity and artificial intelligence into children’s debates.

Hemanth Bharatha Chakravarthy of Harvard College Debating Union, the program’s keynote speaker, appreciated the school’s efforts to organize an international debating competition. He spoke about the “debate and its role in society” and stressed the importance of developing good communication and writing skills.

SAI International Education Group President Shilpi Sahoo congratulated all participating students and said such platforms where students learn about cross-cultural relationships are crucial for the overall development of young minds.

“It is important to work together to achieve the Sustainable Development Goals as one world, one family and to promote inclusive global citizenship,” she said.

The winners were announced after two rounds of deliberation. They were judged on the basis of content, accuracy, clarity, body language and expression. Various topics were discussed during the debate, ranging from the future of Artificial Intelligence in school education to the harmful effects of excessive Internet use. Some of the topics also focused on the future of robotics and its effects on humans, and how the COVID-19 pandemic may have helped reduce the carbon footprint.