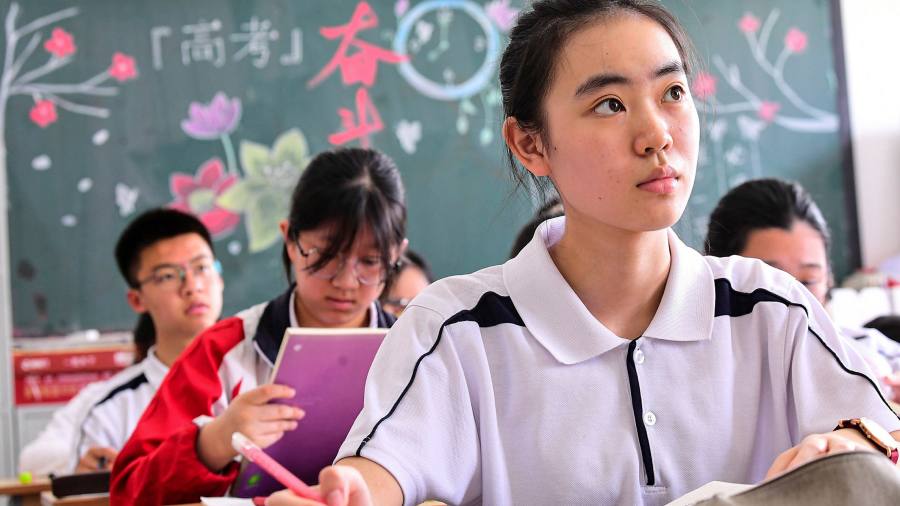 Parents planning to send their children to New Oriental Bilingual Primary and Secondary School in Beijing next year should look elsewhere.

Private education company New Oriental announced in March that it would close the school, one of hundreds of such schools established across China since the 1990s to provide mainly Chinese students with a foreign-style education. New rules prohibited the company from financially supporting these schools, New Oriental said.

The closure is a symptom of wider woes in China’s private international education sector, which has been hit hard by a regulatory crackdown and strict anti-coronavirus policies that have prompted an exodus of foreign teachers.

According to Beijing-based research and consultancy firm NewSchool Insight, in 2020 China had more than 535 “private international schools” teaching more than 450,000 students. Most of them are bilingual schools and many are affected by rules announced last year that restrict participation by for-profit companies and require use of the state curriculum until at least the ninth year of teaching students.

China also has 113 international schools that are only allowed to teach foreign nationals and have about 99,000 students, according to NewSchool Insight. These schools have not been affected by regulatory repression, but suffer greatly from the shortage of foreign teachers.

“The situation is dire everywhere,” said a principal of an international school in a northern Chinese city that only teaches foreign children.

“Teachers bled out of China,” the principal said, adding that his school had struggled to hire overseas substitutes due to China’s strict border control measures to stop Covid-19.

The British Chamber of Commerce in China has estimated that up to 60% of foreign teachers will leave their posts this year.

“Bilingual schools also face difficulties, as they need native English speakers for their classrooms. [and] Beijing’s policies are becoming increasingly restrictive, limiting the use of foreign textbooks,” Gibbs said.

In 2021, the Chinese government erased billions of dollars from the value of publicly traded private education providers when it banned the $100 billion-a-year industry from profiting from basic tutoring services intended to children.

The ban has been disastrous for providers such as US-listed New Oriental, which suffered a net loss of $122 million between June 2021 and February 2022, compared to a profit of $151 million during the same period of the previous year.

Brett Isis, chief executive of Teaching Nomad, a teacher placement agency, said more than 100,000 foreign teachers were employed at after-school English tutoring centers in China before the ban, but their numbers was declining rapidly and the salaries of those who remained had “skyrocketed”. ”.

The ban on for-profit tutoring has had other effects: an American teacher at a bilingual school in Beijing said his students’ English had noticeably declined since it was imposed last year.

Schools are also putting less emphasis on learning English, and many students are focusing more on subjects such as math and Chinese, the teacher said.

Gibbs said the changes to bilingual school regulations were part of a “wider synification of the economy and society”.

“At the beginning of China’s development, they needed foreign capital, foreign know-how and foreign technology. They needed the outside world very much to speed up their development. They are now on this path and their needs are different,” he said.

Julian Fisher, an education consultant in Beijing and vice president of the British Chamber of Commerce in China, said leading bilingual schools and international schools for foreign children would survive the pandemic. “There is always a demand for high quality schools.”

But Fisher said restrictions on profit-making in the education sector, coupled with a slowdown in China’s property industry, meant that investment in new schools had dried up. Large Chinese real estate companies finance hundreds of bilingual schools.

The increasingly stringent regulatory regime is prompting some UK schools to reconsider their involvement in the mainland Chinese market after more than a decade of rapid expansion.

Last year, Westminster School in England scrapped plans to develop six schools in China due to regulatory changes. A bilingual school in Beijing affiliated with the 450-year-old English public school Harrow was forced to drop its famous brand name this year due to the new rules.

Chinese bilingual schools are seen by many parents as a stepping stone to study abroad. But Fisher said parents with children about to start school are “now reconsidering taking the international route.”

“We might well have reached the peak of Chinese students going abroad,” he said.