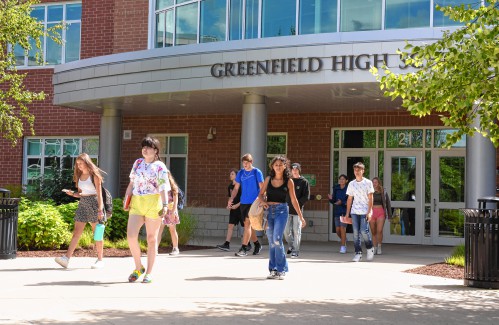 GREENFIELD — The school committee received conflicting reports this week about the implementation of magnetic cell phone pouches at high school, with a student representative voicing displeasure from his peers before the superintendent welcomed the rollout.

Shane Toomey explained that he and his classmates had to keep their phones in a pouch and lock them away all day until they were unlocked at one of two unlock stations when they were fired. The policy went into effect on Tuesday.

“In terms of student response,” Toomey read on his phone inside the John Zon Community Center, “the pouches seem to be causing more disruption than expected. Many students seem upset with the new guidelines being put in place. and have expressed verbally or physically, by attempting to open the pouches, a disagreement with the way the system is operated.

“It’s widely accepted that using phones in class has been a problem,” he continued, “but many (students) showed a strong preference for finding a new option.”

During her superintendent’s report, however, Christine DeBarge said that she “found it interesting to hear Shane’s report on the cell phone pouches, because that, objectively, is a little different from what the whole administration of the shared building”.

DeBarge said she was in high school that afternoon to help unlock the pockets during the dismissal with Principal Derek Morrison.

“And I can tell you, 100%, that every student that passed… (was) polite and cordial and laughed with us when, you know, we struggled to undo some of the magnets,” she said. , jokingly adding that she and Morrison competed to see who could open the sachets faster. “We saw extremely cooperative students. Everyone would have participated. This program, we recognize, is new. We also know that some of our students struggle with not having their phones. »

DeBarge said students have access to counselors and administrators if they’re worried about not having their phones. She also said the administration has made sure students know they can go to the school office to use a phone if they need to contact a family member.

The startup cost of magnetic cell phone pouches is around $16,000, which covers middle and high school students, DeBarge previously said. After that, the recurring cost is around $12,000 per year, depending on student enrollment.

DeBarge said the pouches are made by San Francisco-headquartered Yondr. She said the company reported Greenfield’s rollout “was the best they’ve ever done,” with an 89% compliance rate as of Wednesday morning. She explained that the students took pouches home the night before to decorate and personalize, and were asked to bring the pouches back the next day. Of the 11% non-compliant students, DeBarge said 13 simply forgot their pouches at home. She said 46 sachets “had some level of damage.”

“Company reps actually expected us to have about 70 (sachets) damaged, based on their experience and percentages, so we were very pleased,” she commented, adding that the damage could be from “students using it, instead of, you know, bringing a power saw or something to it. The spindles can be bent a bit making them non-functional. Students have therefore received a new cover.

The superintendent said it was crucial to limit cell phone distractions and inspire Greenfield students to become more engaged in the classroom.