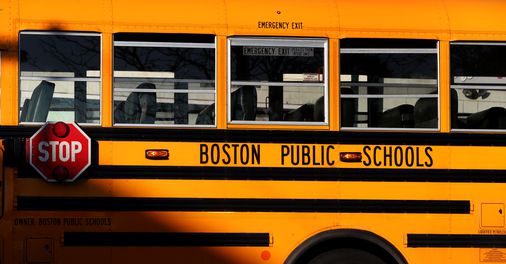 ‘We have a mandate’: Boston leaders hear arguments for elected school board after voters backed it in November

Last month, nearly 80% of Boston voters backed a nonbinding referendum asking voters to elect their school board members. Parents, students, advocates and city councilors began imagining on Monday what it would look like, how many members should be elected and from where.

“There is a desire for the school committee to be accountable to the BPS families,” District 8 Councilman Kenzie Bok said at the start of the hearing. “The question is what is the mechanism for that.”

Boston is the only unelected school board in the state and one of a handful across the country. Under current rules, the mayor appoints school board members.

Proponents of moving to an elected body say the committee is unresponsive to parents, especially parents of color, rubber-stamping the mayor’s agenda and shielding City Hall from any real responsibility for the quality of the city’s schools or schools. policies affecting students and parents.

Proponents of retaining the appointed school board fear that private money supporting special interests could influence elections and school policies. Additionally, aspiring politicians may present themselves to the school board as a stepping stone to higher office, rather than a sincere interest in education.

The decision to elect at least some members of the school committee has strong supporters.

“There is a cry for more democracy, transparency and accountability in city government,” Mejia said in an interview ahead of Monday’s hearing. “It creates a vehicle for these things to be dealt with.”

The petition for the Mejia and Arroyo bylaws must be approved by the city council and signed by the mayor before going to the State House, where the House and Senate would vote on it. If it goes that far, it would have to be signed by the governor to become law. Mejia said she wanted to get the petition passed “as quickly as possible.”

Hearing participants spoke with equal urgency about changing the way the school committee operates. Parents and teachers with experience contacting or speaking in front of the body said there was little response to their advocacy and concerns.

Suleika Soto, a Boston Public Schools mother of two, said she got involved in speaking to the school board three years ago when the district planned to cut funding to Blackstone Elementary School. in the South End. The parents got a promise from the superintendent to build walls at Blackstone, an open-concept school, but the walls have yet to materialize.

“There’s no real way for us to hold school board members accountable for what was promised and not given,” Soto said.

Neema Avashia, a longtime civics teacher at the former McCormack Middle School, which recently merged with Boston Community Leadership Academy, said that when her school contacted the School Committee to advocate against the sale of the McCormack’s open fields to a local non-profit organization, he was told that school committees were not allowed to meet individually with voters. “There is no awareness,” Avashia said. “No one tries to understand the issues before voting.”

A mother at Manning Elementary School in Jamaica Plain, where at least 18 people recently tested positive for COVID-19, called the need for an elected school committee a “safety issue.” Bevin Kenney recently reached out to school board members for help in better understanding whether Boston Public Schools did all they could to prevent the virus from spreading in their school, but it only led to no help or action. “It doesn’t even look like they have a channel to address parent concerns,” she said.

City councilors had questions about how best to structure an elected committee and how many seats should be elected citywide and how many should represent districts as city councilors do. Murphy argued for three at-large seats and the remainder elected by districts. “Having raced all over town, I know how hard it is and how much money it costs,” she said.

If the city has an elected school committee but does not designate certain seats as district representatives, it “could result in a whiter, wealthier school committee,” said Beth Huang, executive director of the voter table. of Massachusetts, a nonprofit organization that works to increase voter turnout among low-income voters and people of color.

She pointed to the town of Lowell as a cautionary tale. After a 2017 federal lawsuit complaining that the citywide general election for school board and city council barred Latino and Asian residents from winning seats, the city was barred from using its city-wide electoral system.

In the first two and a half hours of the hearing, only one intervenor raised difficult questions about changing the way school board members are selected. Pam Kocher, president of the Boston Municipal Research Bureau, a research organization focused on Boston municipal government, said the group is not yet taking a position on the issue, but she warned that electing school board members could not “ensure diversity” because elections tend to “reward those who are most vocal and have the most resources behind them”.

But many proponents of the change dismissed those concerns, saying Boston had become a different city than it was when the school board became an appointed body in 1992. They said the move to an elected school board was a civil rights issue.

“It’s really about restoring a right to vote that was taken away,” said Tanisha Sullivan, president of the Boston branch of the NAACP. “But having an elected school committee doesn’t make all the problems go away. It is a structure where we can, in a more committed way, fight against the problems.