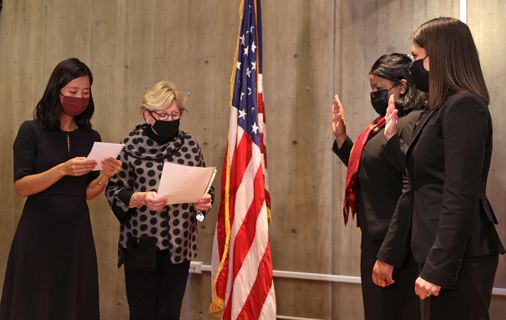 Lorena Lopera and Rafaela Polanco García, both placed on the Boston school committee in July, were reappointed by Mayor Michelle Wu on Tuesday.

Lopera and Polanco García were each selected by former acting mayor Kim Janey on July 22 for terms that expired when Janey’s term ended. Wu picked them on Tuesday to serve out the rest of their term, which ends Jan. 1, 2024.

Lopera, a first-generation Colombian immigrant, is a Boston Public Schools parent and the executive director of Latinos for Education, which works to create leadership pathways for Latinos working in education.

“My educational background and my experience as a Boston Public Schools parent will continue to guide my decisions on the committee,” Lopera said in a statement Tuesday. “I look forward to working with families, educators and community members to make our school system more equitable, responsive and provide quality support for all of our children.”

Polanco García, also a BPS parent and immigrant, is the Director of Parent Engagement and Organization at St. Stephen’s Youth Programs. With a background in bilingual law and advocacy, Polanco García is the first person to be appointed to the school board in Boston – and is believed to be just one of the few school board members nationwide – who needs simultaneous interpretation to sit on the board.

“I am very pleased to have the opportunity to continue representing immigrants and English language learners,” Polanco García said in the statement, distributed by the mayor’s office in English and Spanish.

Wu said in the statement that the two committee members have “served with dedication and urgency to ensure Boston’s public schools are connected to each of our families.”

“I am thrilled and grateful to reappoint these passionate community leaders who have always advocated for equity, inclusion and accessibility in our school system,” Wu said. “They will both continue to work to support families , educators and community members and to champion the high quality education our students deserve.”

“I look forward to their continued engagement as we advance important policy issues with a greater emphasis on family and community engagement where Ms. Lopera and Ms. Polanco García have earned a reputation for excellence in their fields,” Robinson said in the statement.

There are two other vacancies on the school committee. The nominating panel conducts interviews in early December and will give its recommendations to Wu on December 6. Wu will interview the finalists and make his decision in the following weeks, according to his office.